“It’s all in Plato, all in Plato: Bless me, what do they teach them at these schools?”        — Professor Digory Kirke in C.S. Lewis’s The Last Battle

Living about 630–560 BCE, it turns out that “Plato” was actually his wrestling nickname, and it means “broad,” likely as in broad-shouldered. (His real name was Aristocles.) Plato’s nickname fits well for his philosophy because he took a much broader view of life and knowledge. His beloved teacher and mentor, Socrates, invited others into such a broader view of life through his discussions, dialectic, and thorough questioning of ideas and opinions.

At the heart of Plato’s philosophy is a wrestling with visions of true knowledge, especially in the tension between thoughtful individual inquiry versus superficial group-think in the pursuit of long-term flourishing. Despite his flaws, Plato can help us thoughtfully construct and consider different visions of learning and living in our time.

Wrestling with Our Visions of Knowledge:

My “Ways of Knowing Diagram” can fit with Plato’s approach to geometry and knowledge. In reading Plato, geometry has much to do with thinking dimensionally about life and learning.

Although Plato (and Socrates) were somewhat “Suspicious” knowers in their confrontations with the teachers known as the Sophists, whom they seemed to see as hucksters of false knowledge and sneaky rhetoric, their larger commitment seemed aligned with a deeply “Rational” approach to knowing. Most of the “Ways of Knowing” relate perspectivally to Plato (and Socrates), but their primary emphasis connects most to the rational perspective section of the diagram.

Wrestling with Dimensional Knowledge in “the Allegory of the Cave”

The “Ways of Knowing” diagram may also fit well with Plato’s most famous approach to thinking about epistemology: “The Allegory of the Cave.” At the least, his allegory is meant to challenge us to wrestle with our impressions about what we think we know as most real, true, and valuable in our lives.

In Book VII of The Republic, Plato has Socrates explain the following imagery found in “The Allegory of the Cave”:

Basically, “The Allegory of the Cave” shows members of society captured physically by changes and mentally by two-dimensional shadowy images that they assume to be accurate representations of reality.

In Plato’s allegory, a philosopher escapes his chains and gets out of the cave. He encounters the painful intensity of direct sunlight, colors, and other features of real life. After some time of soaking in the truth, goodness, and beauty of this greater reality, the philosopher feels compelled to go back into the cave and attempt to free other prisoners. As he returns to the cave and attempts to liberate the captives, the prisoners think he is crazy and has lost his understanding of reality.

It seems fair to say that Plato was editorializing through the character of Socrates in presenting the “Allegory of the Cave.” Plato’s distaste of appearances reflected his concern that democracy had promoted superficial views of knowledge in his own time. Indeed, a key to understanding Plato’s writings is to consider his disappointment that Athens would condemn his noble teacher Socrates to death or exile, as a result of the poorly practiced views of knowledge in the dysfunctional democratic culture of the time.

Stepping back from “The Allegory of the Cave,” one can see many things to wrestle with concerning Plato’s vision as a philosophy as well as an application for our time. Perhaps we have merely improved our cave-projection technology via flatscreen televisions and questionably smart smartphones while ignoring larger issues of truth, beauty, goodness, knowledge, and justice.

Edwin Abbott adopts Plato’s approach in his delightful satire on Victorian society: Flatland. Much like “The Allegory of the Cave,” Flatland’s main character “A Square” journeys through different dimensions, from his own realm of Flatland to Line Land, Dot Land, and Space Land. He discovers much more to life and reality than he had assumed to be the case. Like the main character in “The Allegory of the Cave,” A Square is deemed insane with his talk of a three-dimensional realm. Philosophers and mathematicians enjoy the dimensional speculation, but there is much for those who are honestly interested in knowledge and issues of social justice as they relate to gender, social class, and race. 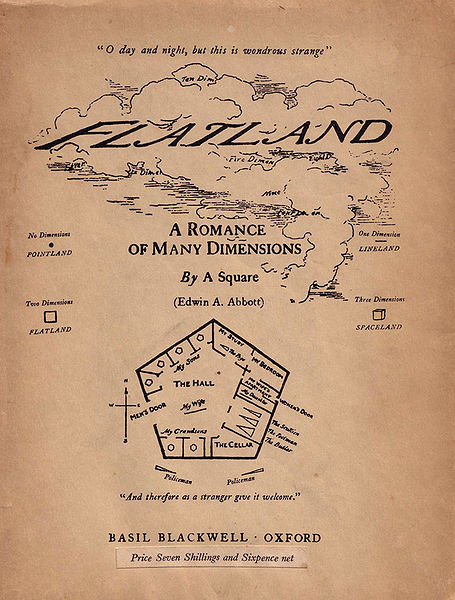 I should share a brief note from C.S. Lewis who also adopts Plato’s cave-analogy to considerations of spirituality and materialism in The Silver Chair. In a strikingly Platonic section of the book, the main characters battle a witch who has the power to make her victims think that the underground cave world that she controls is the only real world.

Time and space prohibit much more discussion about The Silver Chair, but the book and its central idea invite further thinking about whether we are currently, mentally stuck in some cave-entrenched thinking about materialism as all there is to life. For those who are looking for a more philosophical and secular argument about this topic, I recommend Thomas Nagel’s Mind & Cosmos: Why the Materialist Neo-Darwinian Conception of Nature is Almost Certainly False. For readers who appreciate thoroughly worked out Christian philosophical arguments that relate well to the themes in this post, I recommend Paul Tyson’s Returning to Reality: Christian Platonism for Our Times. The issues that such authors engage in are significantly important for common problems of trying to find meaning in life, and neither author invites superficial responses or lazy thinking about pursuing knowledge.

Some Takeaways and Qualifiers

Plato’s “The Allegory of the Cave” can be revisited frequently and continue to yield interesting questions, perspectives, and challenges to our knowledge and our assumptions. It might be a good idea to read it each year at least once with every grade level in high school. Plato’s work at envisioning good lives and good societies is a good practice for each of us to revisit. Along these lines, a good resource to use with students and with yourself is Bill Burnett and Dave Evans’ Designing Your Life: How to Build a Well-Lived, Joyful Life. (Their exercise for drafting three versions of one’s future is looking especially helpful for planning the upcoming school year with its COVID-19 challenges.)

C.S. Lewis has wisely noted that we should read old books so that we can learn to see our blind spots, and that is what these sort of dimensionally imaginative writings from Plato, Abbott, and Lewis can help us do. However, Lewis also admits that the writers of old books also had their blind spots, so we should keep that in mind. An entertaining and briefly informative video takes stock of Plato’s good and bad ideas in Wisecrack’s “Plato’s Best and Worst Ideas.”

Plato was especially hard on democracy, and one can understand this in light of how poorly run democratic processes were reflected in the trial of Socrates. School of Life presents a helpful, brief overview of the criticisms in “Why Socrates Hated Democracy.”

In a sense, we’ve all been in the cave at different times in our life as we struggle to learn and to flourish. Another School of Life video notes this reality and unpacks some of the famous allegory via “Plato: Allegory of Cave.”

There is so much more to wrestle with in Plato’s thinking and writing, but this will have to suffice for now. Next week, we’ll take a knowledge-seeking look at Plato’s most famous student: Aristotle.

Invitation to Reflect and Consider:

For Further Study and Reflection:

Philosophy of Plato (Part 2: Allegory of the Cave), by George Brooks

Lectures on Plato’s “Allegory of a Cave” for USU, by Dr. Harrison Kleiner

“Plato and the Disaster of Democracy,” by Van Bryan at ClassicalWisdom.com

“On What To Make of The Republic, Book 1,” by Dallas Willard (a great help if you’re trying to start reading The Republic on your own!)

Paradoxes of Education in a Republic, by Eva Brann